Both vessels were transiting on an ingress routing through the Strait of Hormuz into the Persian Gulf, in a ballast condition. The first vessel intercepted was the Stena Imperio at approximate location N26.34.00, E056.21.00 21nm NNE of the Al Harf Paninsula. The vessel is UK Flagged and Swedish owned. The vessel can be seen to have reduced cruising speed and conducted evasive manoeuvres at around 1511hrs UTC before turning towards Iran where its AIS signal was lost. The vessel is believed to be carrying 22 crew including Indian, Russian, Philippine and Latvian nationals. The second vessel detained is believed to be the MT Mesdar. The vessel is Liberian Flagged but UK owned and managed. The vessel appears to have been intercepted at 1610hrs UTC at location N26,02 E054,55, 51nm NNW of Dubai, when the vessel was seen reducing speed and made a sharp turn towards Iranian waters. The Mesdar is believed to have been carrying 24 crew including Russian, Latvian, Ukrainian and Philippine nationals. 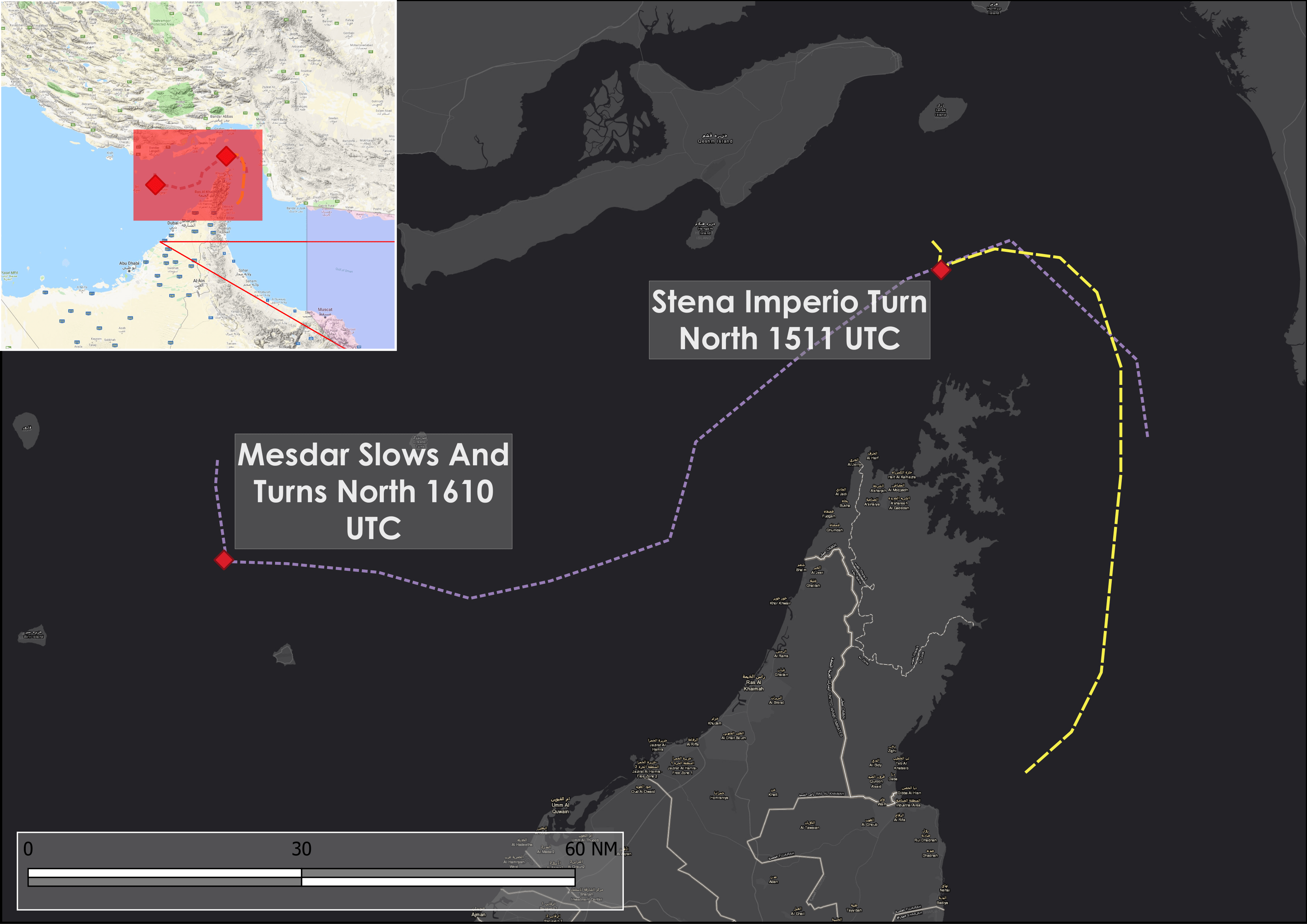 Since the incidents were reported the MT Mesdar has returned to the Traffic Separation Scheme (TSS) as of 1810hrs UTC. Reporting from Iranian sources stated that the MT Masdar was not detained, instead was notified on the environmental and maritime regulations and was then allowed to continue on its way. It is unclear whether the presence of a Russian national (close ally of Iran) as vessel master was instrumental in the release of this vessel.

Whilst the MT Mesdar appears to not be detained the MT Stena Imperio is currently assumed to be under detention by the IRGC(N). This is highly likely to have been a premeditated and calculated operation by the IRGC(N), that may have involved additional larger Iranian assets. The precise methodology of interception is unclear; however, it is possible that warning shots may have been used to intimidate the vessel masters into altering course. At this time, no details of distress signals have been received. The interception of these vessels is likely to have been a pre-planned operation and intended for use at a time where Iran perceives there to be strategic narrative to be leveraged.

Whilst this incident appears to be a dramatic escalation of events within the Persian Gulf, it is essential that these incidents are viewed within the context of wider events. Currently Dryad assess these latest incidents to be further evolution of a localised issue between Iran and the UK, and as such there is deemed to be no additional increase in the risk profile to wider international shipping beyond UK interest vessels.

Iran has repeatedly contested the legal legitimacy of detaining the Iranian tanker Grace I and has repeatedly stated that it would conduct retaliatory detentions on UK interest vessels. Recently UK Foreign Secretary Jeremy Hunt commented that the UK would be prepared to release the tanker for assurances that the vessel would not call in Syria. On Thursday 18th July Gibraltar’s Chief Minister Fabian Picardo was reported to have held a “constructive and positive” meeting with Iranian officials in London to discuss the tanker. However, on 19th July the Iranian foreign minister Mohammad Javad Zarif commented in interview that the UK appears to be working against wider EU interests with respect to the preservation of the JCPOA agreement by siding with the US and acting in accordance with US interests and not those of its E3 partners. In addition to these statements, the government of Gibraltar released a statement stating that “…at a private meeting of the Supreme Court on an application by the Attorney General, the Court has extended the period of detention of the vessel, Grace 1, for a further 30 days and has set a new hearing for 15 August 2019,” It is therefore assessed that these latest incidents are in direct retaliation to the court judgment extending the detention of the Grace I.

As a result of these latest incidents, it is almost certain that the UK will seek to bolster its Naval resources within the region. Dryad have received unconfirmed reports that in addition to HMS Montrose already within the Persian Gulf and HMS Duncan en-route from the Mediterranean, the UK is considering the deployment of HMS Kent currently in Portsmouth and the support vessel RFA Wave Knight, currently in the Western Mediterranean. Renewed focus will likely be applied to the US Maritime coalition; however significant issues around legal legitimacy and rules of engagement will be a significant barrier to full implementation of this.

It must also be noted that in targeting British interests in the Strait of Hormuz, and not those of the US, it is likely that Iran is attempting to target what it perceives as the ‘weaker’, ‘junior’, coalition member (alongside the US). This in turn is realistically an attempt to drive a wedge between the US and its allies, and further weaken any potential maritime coalition. It is clear as the UK will be forced to respond, but will find few avenues to do so, both militarily and diplomatically, the UK is unlikely to alter its position of support alongside the US, however in doing so UK vessels operating within the Persian Gulf will likely face heightened risks in the medium to long term.