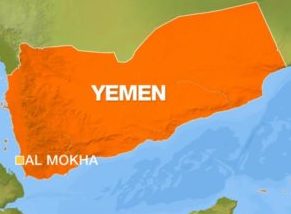 Wadah Dobish, a spokesman for government forces on Yemen’s western coast, told The Associated Press news agency at least four missiles fired by the Iran-aligned rebels struck warehouses used by the allied forces known as the Giants Bridges in the port town of al-Makha (Mocha) on Wednesday.

He said their defences intercepted at least three other missiles.

The media arm of the Giants Bridges force posted footage online showing flames, and explosions were heard apparently from the warehouses.

Officials said at least 12 people, mostly fighters, were wounded in the attacks.

A statement from the government forces on the western coast said the attacks also hit a refugee camp and a hospital run by Doctors Without Borders in the town.

The medical aid group did not immediately respond to an AP request seeking comment.

All officials spoke on condition of anonymity because they were not authorised to brief the media.

The escalation could jeopardise a UN-brokered ceasefire in Hodeida. The port city is the main entry point for humanitarian aid to Yemen, where more than five years of war have spawned the world’s worst humanitarian crisis, with near-famine conditions in some areas.

Last year heavy fighting erupted in Hodeida after government forces backed by the Saudi-led coalition moved in to wrestle control of the strategic city from the Houthis.

After month of clashes, the two sides agreed to withdraw their forces from the port and the two smaller ports of As Salif and Ras Issa as part of the ceasefire agreement.

The deal, which was seen as an important first step towards ending the conflict, was vague on the withdrawal, however, saying a “local force” would take over without specifying who would lead it.

The conflict in Yemen began with the 2014 takeover of the capital, Sanaa, by the Iranian-aligned Houthis.

A Saudi-led military coalition allied with the government intervened in March 2015. The war has since killed more than 100,000 people, including thousands of civilians, according to a database project that tracks violence.